It had been a successful few years of avoiding the sounds of Rat Boy, birth name Jordan Cardy, the south east of England’s then teen indie-pop outsider. He had all but left my consciousness until a review of his debut album caught my eye the night before its commercial release. My curiosity took over, and the next thing I knew I had SCUM on repeat, reading each new review as they appeared on the web, trying to make sense of what I was hearing and reading.

A mean average of the reviews would paint Cardy as an experimental alternative artist tipping his cap to the golden years of British alternative music while weaving his own inroads to commercial and critical success, he’s the voice of the post-brexit youth. All hail the second coming of brit-pop. What I could hear suggested otherwise. Below is a pick of the most notable reviews, my thoughts on them and the album itself.

This is the review in question that started this odyssey, a shorter one than I was expecting, and certainly not what I saw coming as my first whiff of Rat Boy after writing him off as an NME flavour of the month some time ago. Our writer see’s SCUM as ‘a state-of-the-nation record that’s as sparkly as it is snarky’. I suppose what they want us to find in Rat Boy is a mouthpiece of the working class millennial, a litmus test for the state of Britain in 2017. But while themes of distaste, frustration and boredom are wildly apparent along with some loose socio-political commentary, Rat Boy is no ambassador of my generation, ‘his rebellion’ is at most a storm in a can of red stripe if I may; directionless and inarticulate, a shotgun firing shells at the barn doors of Trump, Brexit, the old electorate, the 9-5, moderate fame, the establishment… 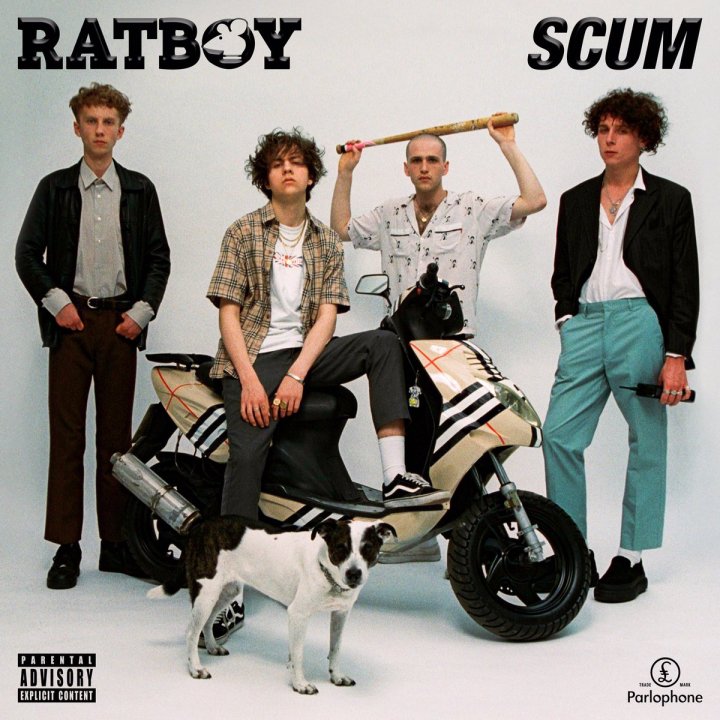 So anthemic in its desire and yet so anaemic in effect, Rat Boy’s form dictates content, a trap that claims many a poor songwriter. The rhyming couplet is a lyrical mechanism as old as time. Its simplicity to employ in song writing creates a thin line between genius and mediocrity. And Cardy runs headlong into the wilderness of the latter. Hearing ‘World War 3 / Crazy’ and ‘North Face / Court Case’ over redundant, half-baked melodies within stories about men in Nike shoes kicking doors in is surely enough to make your teeth grate and your eyes roll to the back of your head.

Lyrics feel as though no sooner had they appeared in Cardy’s head than they were down on the track. Spontaneity is by no means a bad thing, and creative purity is much to be admired. But when it feels like an idea follows another because it rhymes (‘I’m like a tandem, going in random’) or is a vague turn of phrase (‘And shit’s about to go down like Titanic’) you must question the process and ability of a musician.

I would expect such soft criticism from a lesser known source looking to prop up a young artist for mutual benefit, but The Guardian needs no such politeness. The true review is here: Rat Boy is ‘the sort of pop star dreamt up by execs looking to cash in on millennial, austerity-era ennui’.

Brought to the office space of Parlophone Records off the back of 2014’s sound cloud success The Mixtape aged 18, messy haired, D.I.Y street native Jordan Cardy must have appeared a golden burberry ticket for the record company looking to appeal to the aforementioned demographic. After four years of a Tory Lib-dem coalition government doing their best to delude the working class youth, now was as good a time as any to drive them toward the sounds of consumable, angsty faux-rebellion. Rather than continue this cynical yet beneficial critique of SCUM, our writer falls for Rat Boy’s ‘cheeky Essex-lad persona’, semi-catchy pop credentials, and perhaps doesn’t wish to quell whatever rebellion his pseudo anarchy may stir in the minds of his teen fan base. Whilst these are forgivable notions, opinions and speculation on my part, to suggest this album exhibits a ‘versatility’ is objectively false.

Two versions of the album surfaced on Spotify on the 15th of August; a director’s cut and a theatrical cut if you will: SCUM and SCUM (Deluxe). The former, a 42 minute 13 track monotone indie-pop blitz and the latter a 58 minute, 25 track extended conceptual deep cut where corny satirical skits introduce every other track in the style of a Grand Theft Auto radio station. These attempt to build a universe around the disengaged, disillusioned narrative world of Cardy: namely getting mugged, being emotionally nonchalant and ‘coughing up the p-pollution’:

‘We kinda wanted to make like the SCUM world so all the music videos kinda link together, and we’ve got all these characters, and if you listen to the album, what you see in the Revolution and Laidback video’s kinda makes a lot more sense now, y’know what I mean, like when you open the vinyl like I drew like a map kinda like Grand Theft Auto with like all like the sort of places that we’ve explored on the album like referencing in the songs and in the videos so you kinda get this sort of picture now like when you listen to it. I want people to listen to the vinyl and then look through it, y’know what I mean and like, for like a lyric book which is like a magazine, so it’s kinda like got all these places in it and bits of art work so… I think it links it together… dunno’

Cardy’s concept was quite clearly up in the air, proved not least by his need to hedge his bets with two different releases. What is most strange about the duality of this project is that the shorter cut is without two of arguably the most musically accomplished, gear shifting songs ‘Get Over It’ and ‘Sad Sad’, both of which offer breathing room away from the redundant high speeds of the rest of the album.

Indeed as most of the reviews I came across suggest, SCUM does show of a range of styles, it skips around SKA, hip-hop, indie and pop, but the brash blends at best fall into hazy insignificance when Rat Boy scurries down experimental paths to conjoin these once adorned genre’s in new light. With such a dense mesh of influence and a mixing ideology that replaces what little notation, chords and riffs there are with a punk scuzz, some fail to see the sonic grave robbing at play:

Individuality is everywhere. Every artist is a talent operating in their own special sphere. Most of them, in all honestly, aren’t actually the beautiful snowflakes they’re made out to be – existing as simple iterations on an existing formula. It’s always been that way. But there are exceptions.

Rat Boy, our writer goes on to suggest, is that exception. The album is ‘A melting pot of hyperactive energy’. I’d say half right, it certainly boasts an incredible energy, but a melting pot this is not, more of a cesspit. With cameos from the old guard Damon Albarn and Graham Coxon, Rat Boy fishes up the dregs of sounds from Britain’s bygone era’s they’d do well to move on from. There’s the wannabe ragga soul of ‘Turn Round M8’, the Oasis djangles and horns on ‘I’ll Be Waiting’, his very own Favourite Worst Nightmare ‘Knock Knock Knock’, his best Kooks impression on ‘Laidback’, and the nauseating Beastie Boys parody ‘Move’. While he sings ‘I’m bored of comparisons jumping the gun / People need to learn to have just a bit of fun’ he simultaneously wears his influences on his sleeve, on his trousers, around his wrist, he may as well have Jamie T etched into his forehead. It’s an almost algorithmic, Netflix original album that offers a crowd-pleasing nostalgia mirrored with the latest trends. And it is this blend of the old and “new” that has stirred the hope in some of a British guitar music renaissance led by Cardy.

At a time when guitar bands are out of favour, Cardy seems best placed to lead any revival with his audacious exploration of indie, punk, ska and hip hop.

It’s not quite the heady days of Britpop but Cardy is the anarchic voice of his generation.

While it’s true guitar band music has indeed lost its connection with the mainstream in Britain, and certainly most of its innovation outside of it, I highly doubt Rat Boy is its saviour. Even our writer who argues on the contrary can only deliver a 137 word long thesis on how he has shown potential to do so with this album. To credit an artist with a 4/5 star review and place the withered baton of British guitar music in their hand in such few words just goes to show how desperately and frivolously the idea will get bandied about.

As soon as a young upstart changs those six strings with a bit of sentimentality for the old school and picks up some traction along the way, music journalists hoist the “British guitar music isn’t dead” banner. Well it is, for the most part, and I’d rather it stay that way than be zombified in this respect. Cardy shows anything but ‘audacious exploration’ on this project, it’s a re-hash, disguised by its many layers, but a re-hash nonetheless. It’s the plucky, south London street urchin Jamie T aesthetic with the mild psychedelia of Madchester, and the bounce of a punk/hip-hop regurgitated Gorillaz cocktail with the dulcet lovesick puppy eyes of pre-dad rock Alex Turner and The Kooks.

Even the NME from whom a review about a guitar wielding working class lad would have usually been a clean sweep of sentimentality and support had to admit the ‘clunky rhymes and suburban-dad rap’ present on the album. But alas they can’t stay mad at their 2016 best new artist for long, as these things ‘barely matter’ as a whole.

We are settling. We hear something like this that appears to be rubbing the industry up the wrong way or attempting to restore some lost musical identity to our country, and we cosy up to it. This is epitomised best by the send-off in a review from CLASH.

Although ‘SCUM’ can sometimes feel like the 2017 update of music you’ve enjoyed from the past 20 years, at its best Rat Boy delivers some of the most interesting and exciting moments to come from British music this year.

What they describe is limbo, a blissful ignorance. They acknowledge an overwhelming shortfall of creativity and tell you it’s the best you’re going to get. I refuse to believe that Rat Boy is our finest rock export, but then again, what other hope have we got. Bar the innovation of post-punk and post-rock bands here in the UK such as My Bloody Valentine, Wire, Disco Inferno, Stereolab, Bark Psychosis to name a few, alternative guitar music has begun a nostalgic retreat in order to tackle the hip-hop and sugar pop zeitgeist. Although that’s an issue all of its own for another day, it’s important to note that SCUM is not the exception to this wave of diluted, compromising alternative music that he is made out to be, instead he is another victim of an industry that pulls guitar music into the cosy undercurrent of the mainstream.