“Enough of the horsing around, although that is what us cowboys do…”

Vice is like any current film in its delivery; it sort of throws its arms around for a while and then gets tired, in the end becoming an out-pour of exhausted thoughts. The film constantly introduces itself, full of montages and strange old YouTube clips. At first Cheney is a day-dreaming rock and roller, drunk-driving and going nowhere in life, then we know the rest. It covers so much of his life, trying to be a complete biography, meaning that we don’t really see any aspect of a life in detail. As well, each bit of dialogue is too constructed, too inevitable, and even when the actors look at each other they are looking at us, holding our hands through the story. Sometimes with uncomfortable family drama and others in tense policy dispute, but always with the feeling that everybody is there just as a reaction to the main man. We don’t see Bush or Rice or anyone else creating any friction because the film knows where it’s going and nobody can stop it, Cheney appears in full control of his own destiny.

There are lots of shifts in time, slightly jarring at points; and mostly they reflect a bias, as the film fixates only on power for the sake of itself without trying to understand the worldview behind. Because the mainstream consensus was that Bush had a weak mandate – the Senate was 50-50 and the vote was extremely close – Cheney pushed to remind him that the President “cannot share power that belong to him alone.” The book Angler, which I read this quote from, gives a full account of this and seems to have been inspiration for the film. However, in Vice, he offers this advice to settle a dispute between his own people. So instead of being a point about projecting power, it became another which bolstered the idea that he only sought to accumulate it. There are lots of missed opportunities, the film consistently positioning Cheney as a sort of empty bureaucrat so that it doesn’t have to reckon with itself.

As Nicholas Lemann’s review argued, this misses how ideologically driven he was, it almost lets him off. His early assignments were not just lessons in power play, they were a place to become part of the counter-revolution against the wildness of the 60’s. He had the John Birch Paranoid Blues; commies and students would ruin the country if people didn’t start taking them seriously. His first job was to dismantle the office of Johnson’s War on Poverty, and the second, a decade later, was planning for American dominance as the Soviet Union fell. Lemann’s crucial point hits at the idea that Cheney probably never considered that he could be heading in the wrong direction. He must have believed that despite what Democrats and moderate Republicans said in public, privately they believed in “the small cadre who understand” – those with the guts to say what everyone else is thinking.

This forms part of a defensive mindset, a worldview that sees threats in change and instability. The film tries to show some of this but just offers a mash-up of Reagan clips, bulked out with young Mike Pence or young Jeff Sessions (looks the same) – it doesn’t tell you the extent of the backlash. Against women, the Stonewall generation, neither does it point the finger at those hippies who ran out of energy for the chance at a car and home-ownership. So far from that first Cheney, where he comes across almost apolitical, a sort of every man in a flannel-shirt, a beer drinker, but he probably spent those years muttering under his breath. 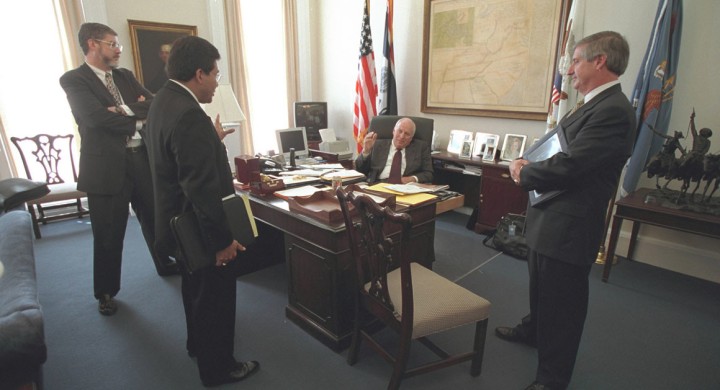 So there are many inventions and lots of them misfire – in particular one PowerPoint presentation about the Unitary Executive Theory, it is probably the largest inaccuracy and like all smaller missteps it obscures the fact that reality is far more absurd than imagination. The film also includes quite graphic reconstructions of torture without justification, mostly just as a stick to beat people with. I always wonder if anyone who has been through that can attend the cinema, so often are the careless and quite gratuitous depictions of violence. The director would argue that these scenes play a role; as they come between shots of Cheney and Bush giving the OK, creating a contrast between the comfort of the halls of power and the lives that they touch, but that is surely too important an idea to just skim through.

David Bromwich wrote an even tougher review of Vice, calling it a “half-baked reminder,” where, “creeping around the edges is the lazy conceit that we are a nation of morons anyway.” This is one thing constantly off-putting in modern cinema – being lectured to by films that can’t even decide if they want to be taken seriously. Even worse is the lack of care they take with dialogue, maybe even a lack of effort, especially in these biopics full of family affairs. The scenes including Lynne Cheney could be swapped out for those same scenes in The Neil Armstrong Film. If these relationships are so trivial then why put them in at all? In both drama is a woman’s business, just for decorative lulls in the tempo that are aside from the real action of male life. Lynne Cheney says the VP is a nothing job about five times in the build-up to Dick inevitably accepting the role, like a nagging anti-narrator more than a real person. Is it just that Hollywood biopics have to be this way, or more serious a creep up of the 50’s attitude; the woman behind the man, the arm-clinger, these mythical images that take the place of reality and make shells out of people.

Vice had a few shots of Bush and Cheney in getaway mode, partaking in the cowboy image that has done so much for so many presidents; time on the ranch, a connection to nature, a tough image – but who was the tougher out of Bush and Cheney? Together their War on Terror created a frontier out of everywhere, a mental one with endless ills that threatened the American way. Bush at the ranch was the spectacle, more harmonica than lyrics, those were Cheney’s – the moral undertones, the reality; untrusting and obsessive, bolstered by an unlimited appetite for work that had no boundaries. He rode into the Vice-presidency unscathed after putting every other potential running mate through hell; phone records, medical records, anything incriminating was fair game. He watched the others and knew more about them than their parents and partners, allowing the chance to dispose of them when he made his mind up. There is a strange celebratory tone in every account of him, including Vice, how he broke the rules so well – each account fixates on how power moves quickly and decides that people gulp it down willingly. But to what end? Games of power can be won but then they require an afterthought. Cheney’s afterthought and ambition would “remake our world” as Mark Danner put it, it would instill a new power structure which gave him constant access and input, virtually in all areas of policy – and as for a legacy…